Have a Lie In

My husband has repeatedly told me that he LOVES it when I get creative on his account.  I used to be really good at it when we were newly weds.  But he never really reciprocated, and I just sort of… quit.  Nowadays, my creative juices go mainly toward digging through my cupboards and pulling a dinner out of my behind (if you’ll excuse the language).  But seriously.  Can you relate?  For years, he’s been hinting at me to bring back the fun creative part of me and let the functional creative part of me take a sabbatical. I often would kindly tell him that it was hard to create something and give it and then get nothing back. He’d apologize, and we’d go on with life.
As time has gone on, I’ve grown up a little and realized that reciprocation IS NOT what it’s about. So I’ve been gradually bringing the fun creativity back to our marriage. Granted, I mostly just peruse Pinterest and copy ideas… but I DO try to make them my own.
Take tonight for instance…

My husband works a demanding job. Sometimes he leaves the house thinking he’ll be home by dinner and doesn’t end up coming home until the wee hours. I’m dying for a date, but this week it just isn’t feasible to actually LEAVE our house.
Enter this idea.

At the store tonight, I stopped off in electronics and picked up “Grease” for $7.50. As I went through my shopping list, I kept my eyes peeled for fun stuff to add to the movie.
I ended up with an movie-style bowl with un-popped microwave popcorn in the bottom, and I knew it would make the perfect “basket.”
Ever since I was pregnant with my girl and the smell of popcorn made me absolutely SICK, I haven’t exactly enjoyed popcorn, but I do love it with Junior Mints on top. And really: the mint to popcorn ratio is 3:1. But when you’re married to a microwave popcorn junkie, you deal.
I nabbed a box of whoppers because they’re “malted” and Grease is sort of centered around malt shop goodness. We’re not big on caffeine or soda, but Coca-Cola and poodle skirts go together like rama lama lama ka dinga da dinga dong.
I threw in the cracker jacks for good measure.
In the end, they were given a pink slip what with the microwave popcorn eagerly waiting in the bottom of the bowl to be popped… the jacks just seemed redundant. 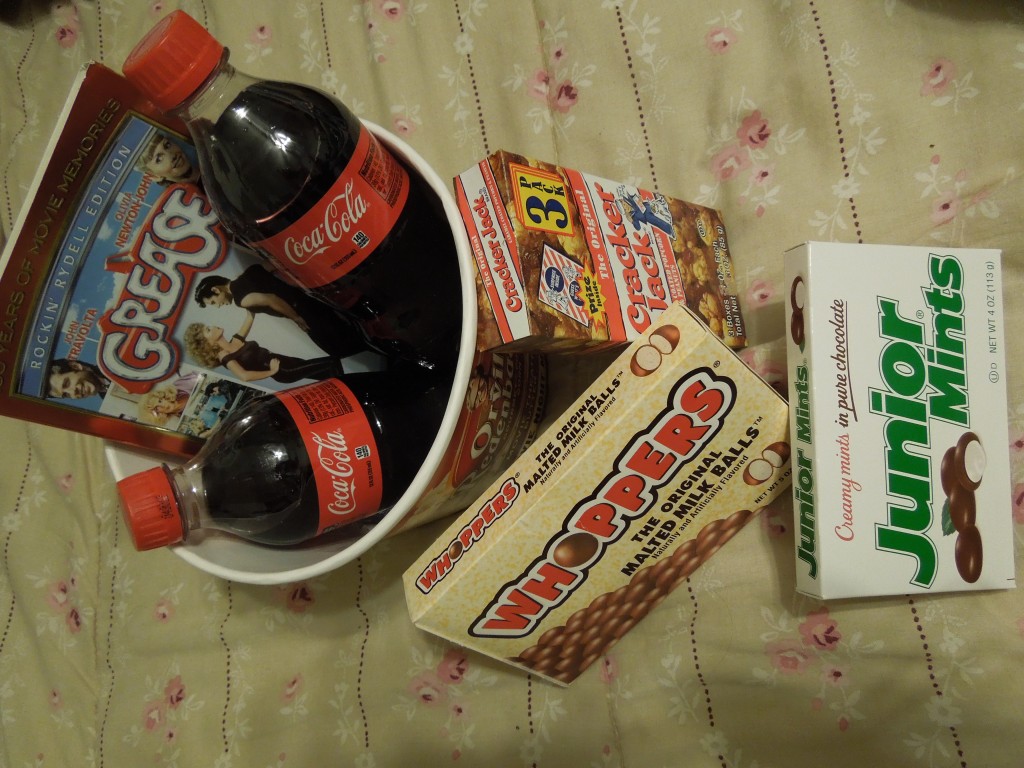 To make everything fit, I laid on Cola on it’s side and stacked things on/around it. It gave it a nice layered look.

I could have stopped here and he would’ve gotten the point… BUT I couldn’t resist. I played around with some clip art I’ve saved here and there. I got this: 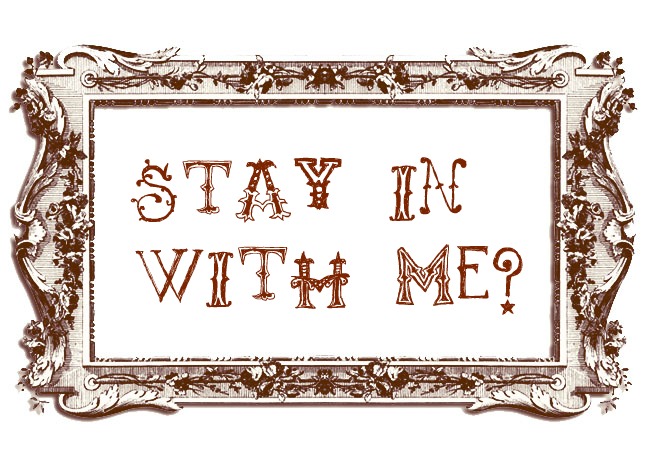 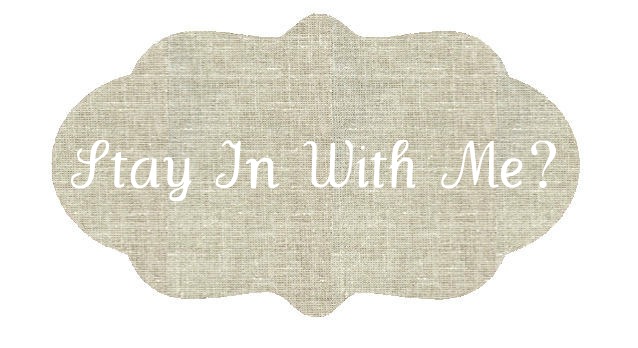 Also okay.
I KNOW I should have gone with something that went a little more with the 50′s theme of the movie and food, but after I stumbled on a vintage picture of a woman smoking and dreaming of a man, I could not resist. I was absolutely powerless.
More often than not, I like to believe that I’m not only British but a little early 1920′s as well. Don’t get me wrong, I love disposable feminine products just as much as the next gal, but a huge chunk of my heart belongs to 1920′s-ish. Another big chunk of my heart belongs to PicMonkey.com. With our powers combined, we bring you: 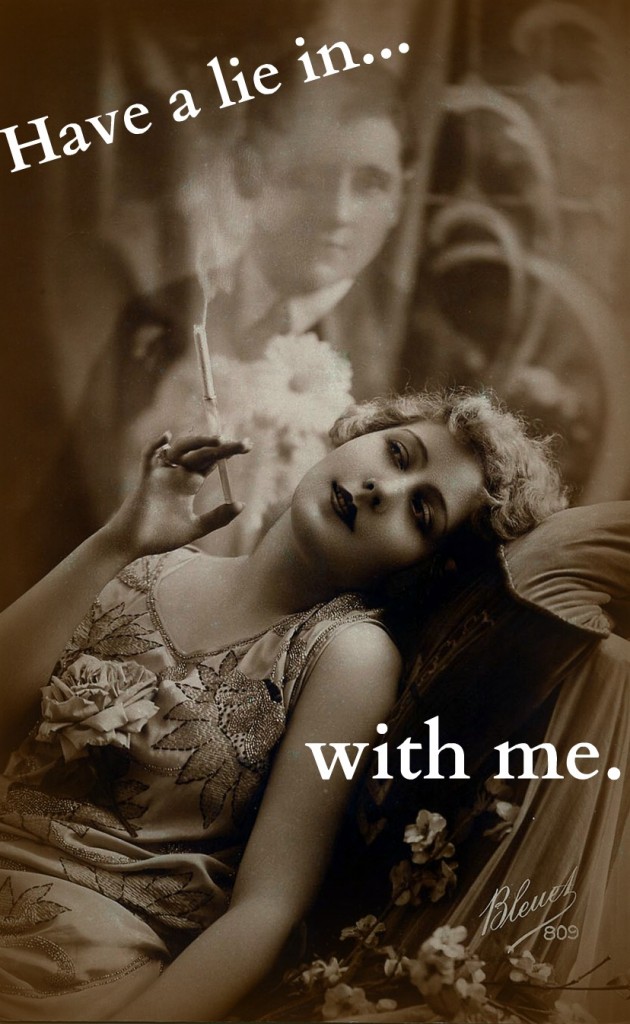 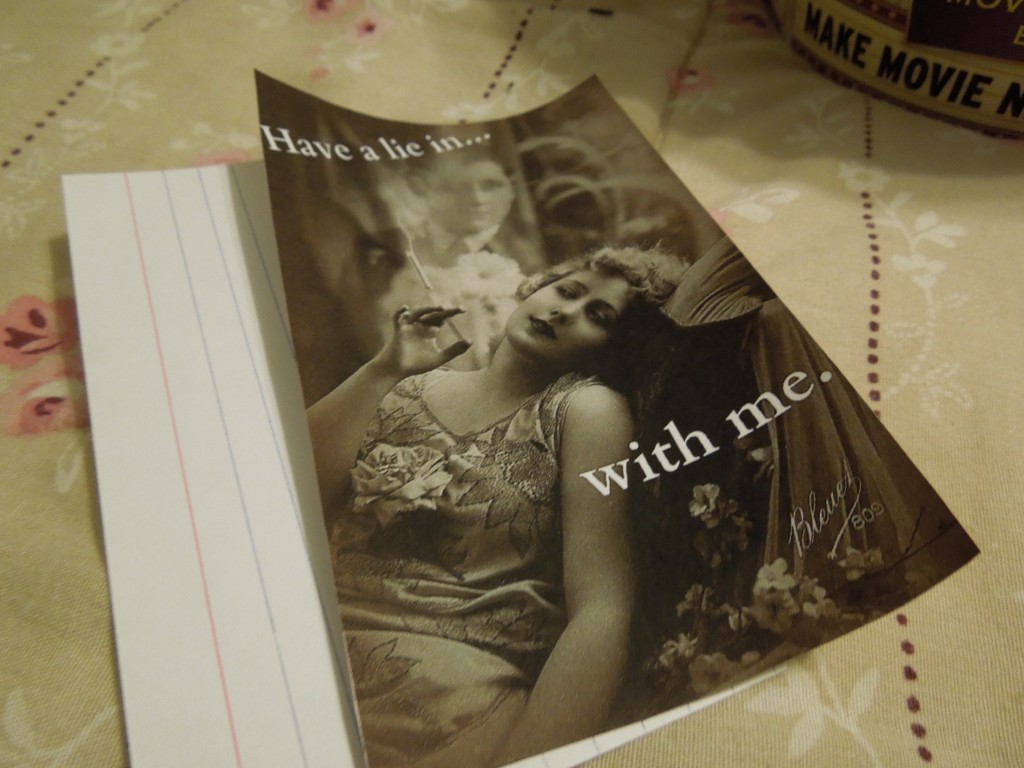 I took black ribbon and wrapped it tightly around the bucket, securing it ever-so-unneatly-yet-discreetly with packing tape: 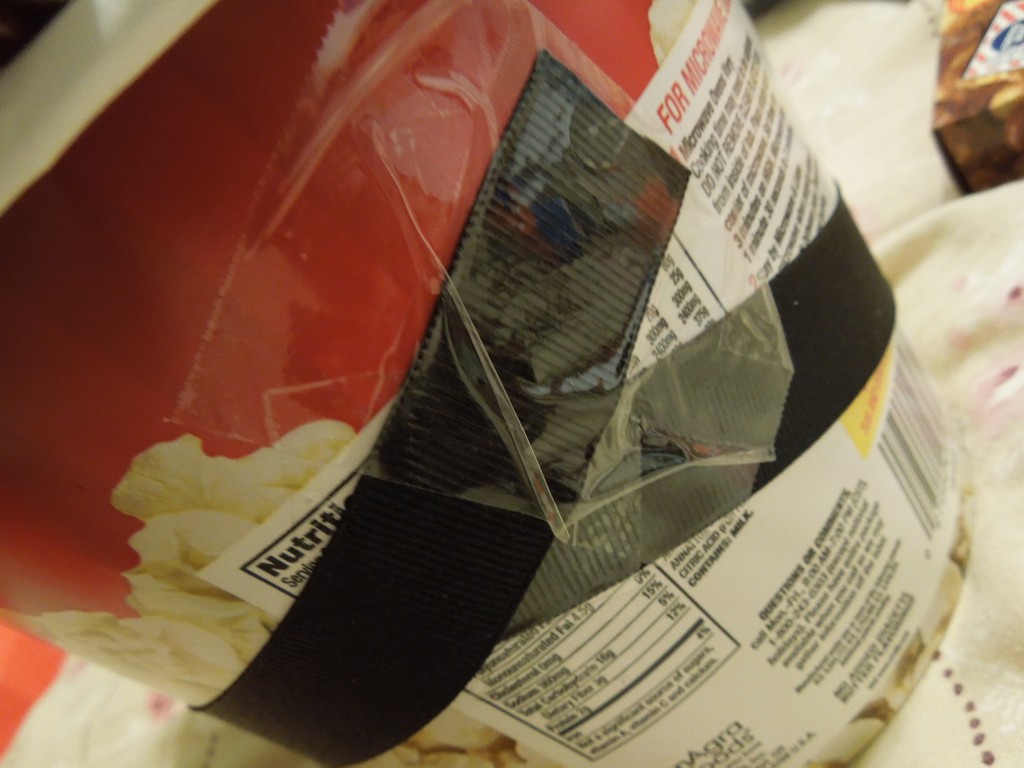 From the front of the bucket, you couldn’t see the tape at all. I wriggled the sultry woman under the ribbon and… 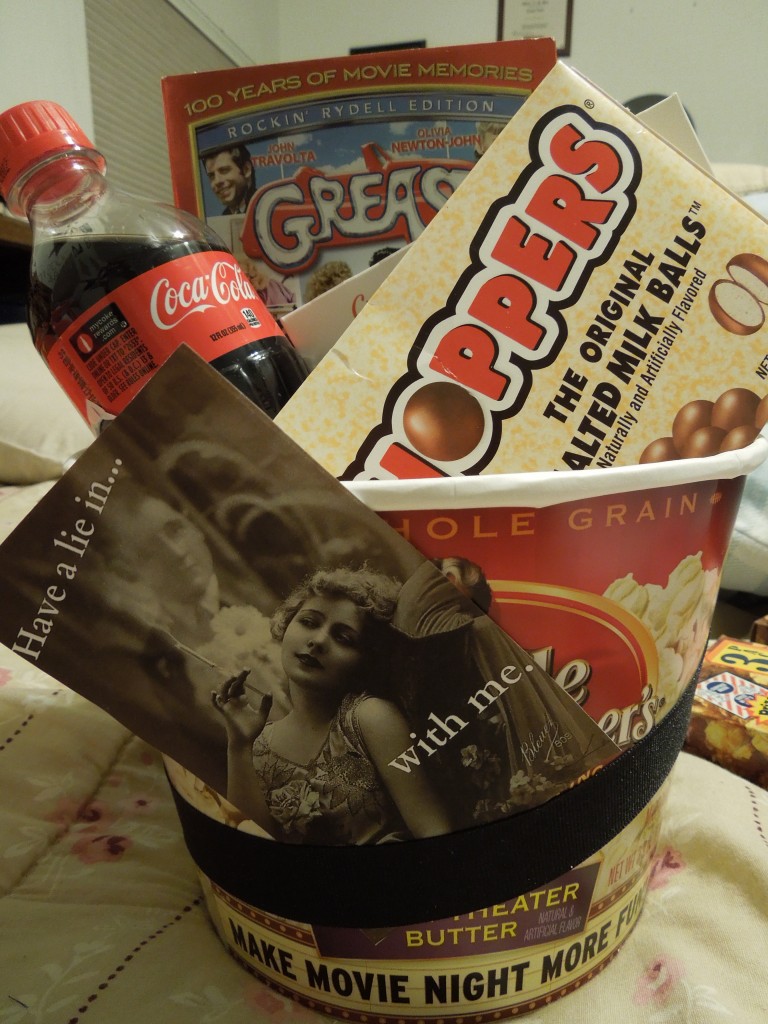 Ta-da!
It’s all wrapped up and waiting on our headboard. 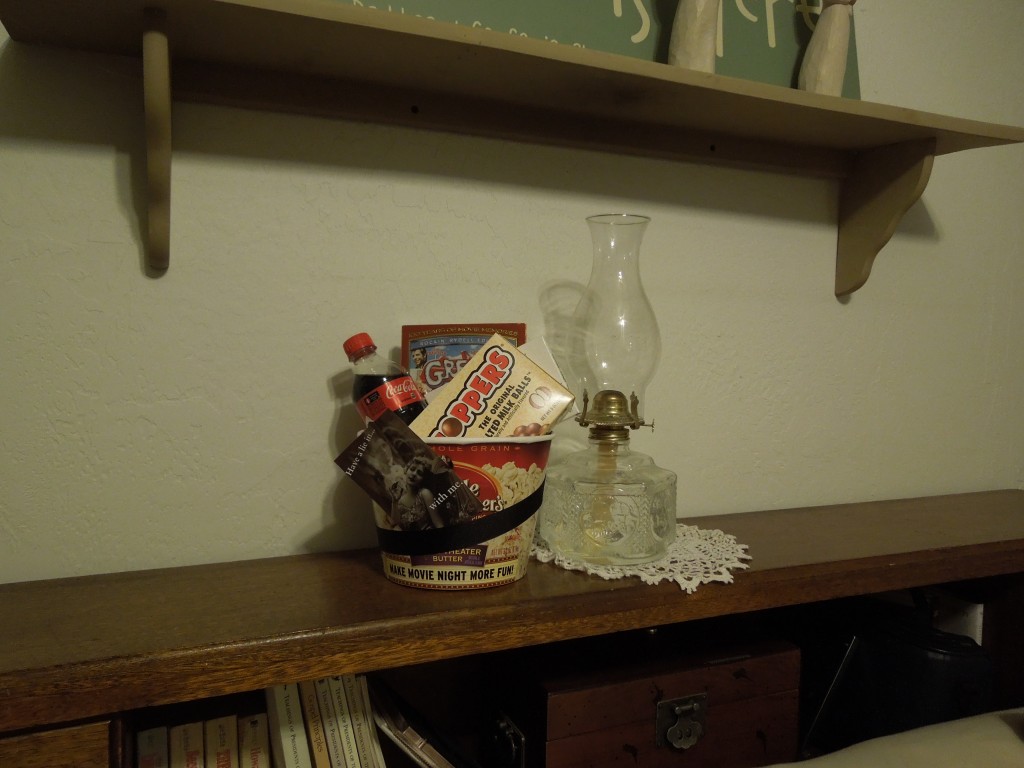 And in case you’re wondering: he actually does like “Grease.” One common ground we both have is music. He sang in top choirs in high school, and I sang in our ONLY choir (which bless our small town stars did NOT have try outs). You won’t catch him dead (or alive for that matter) watching “The Sound of Music” but “Grease”? Well, that’s a horse of a different color.

I would love to take this idea and really run with it… substitute the smoking girl for something a little more retro and take the bucket with us on a drive out to the middle of nowhere and watch the movie on our lap top at a makeshift drive-in out of our car. Wouldn’t that be fun? Poodle skirt optional, of course.